High in the hills above La Paz in its sister city of El Alto (the highest major metropolis in the world) visitors can find one of the weirdest, most interesting spectacles in Bolivia: the fighting cholitas. A theatrical, comedic show drawing inspiration from North American professional wrestling, this unique event has been gaining popularity since its inception and now draws weekly crowds of foreigners and locals alike. This type of thing may not be for everyone, but those who decide to check it out will be rewarded by an encounter with a quirky, idiosyncratic side of Bolivia.

Quick Tip: If travelling to or from Lima Airport, it is strongly recommended to use the luxury Airport Express Lima bus to get to or from your hotel. Safer and cheaper than a taxi with no baggage limit as well as free Wi-Fi and USB chargers onboard, it is ideal for travellers.

Many tourists mistakenly believe that these “fighting cholitas” are practicing a traditional form of Bolivian martial arts, but the history of this style actually begins in the United States, where a type of staged wrestling featuring dramatic storylines (epitomized by World Wrestling Entertainment, Inc., or WWE) has been performed in various forms since the 19th century. This type of wrestling with an emphasis on entertainment was highly influential on a native style of performance art fighting which developed in Mexico, called lucha libre. In addition to the dramatic storytelling of American professional wrestling, Mexican innovators introduced colorful masks which are reminiscent of ancient gods or animals–a practice which is said to be a nod to the significance of masks in Aztec culture.

During the golden age of Mexico’s lucha libre in the 1950s and 1960s, many of its performers traveled to other countries in Latin America promoting the sport. It was at this time that Bolivia’s first lucha libre organizations were formed, inspired by the Mexican wrestlers. In subsequent decades, lucha libre continued to gain popularity, and there are now several leagues active in the country including Titanes del Ring (Titans of the Ring), Luchadores Indendientes de Enorme Riesgo (Independent Wrestlers of Enormous Risk), and Lucha Fuerza Extrema (Extreme Force Wrestling). It was the first of these above leagues, Titanes del Ring, which pioneered the “cholitas” concept.

For information on booking a tour, comparing operators and reviewing prices we recommend to use FindLocalTrips.com a comparison website for tours and activities across South America.

Bolivia’s cholitas luchadoras first began practicing their craft in the early 2000’s when a group of women in El Alto created a circle of luchadoras inspired by Mexico’s lucha libre style of wrestling. This circle was partly for recreation and entertainment, but also partly as a way for women who suffered domestic abuse to take out their frustration and stress. Later, the Titanes del Ring league decided to introduce women fighters as a way to boost ticket sales and gain publicity, and invited these practiced women to join. At first, the women dressed similarly to the men in regular lucha libre style with tight spandex and a full-head mask. It wasn’t until the ladies experimented with traditional “cholita” garb that the performances piqued the interest of the public and popularity really started to take off. The sport has since branched out and several independent organizations have been formed for female fighters. 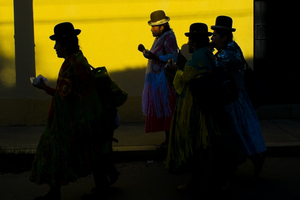 “Cholita” is a diminutive form of the word “chola,” originally a pejorative term referring to those of indigenous heritage. In Bolivia, the most populous group of indigenous people are the Aymaras, who have their own language and distinctive style of dress. Aymara women are quite recognizable, usually wearing colorful layered skirts, shawls and petticoats with a bowler hat resting atop long, braided hair. The roots of this style supposedly date back to the Spanish inquisition, when indigenous peoples were forced to adopt European dress which they adapted to their own climate and customs (for more information on cholita fashion, stay tuned for our upcoming article about it). These outfits are what give the fights their unique look and has attracted much attention both in Bolivia and internationally. Already popular with a mix of both locals and tourists, these women came to international public attention in 2006 with the release of the short documentary The Fighting Cholitas.

Quick Tip: Experience the thrill of biking the Bolivia Death Road, one of the most dangerous roads in the world! Enjoy amazing scenery as you descend from high-altitude mountains to jungle landscapes.

Anyone who attends a match can expect to experience a truly unique event that is not like any other tourist attraction. As in classic Mexican lucha libre, the fights feature a técnica, who fights clean and represents the good side, and a ruda, who fights dirty and represents the evil side. These two sides battle it out in a type of morality play, representing the battle between good and evil. These events can become quite rowdy, with the crowd becoming very involved in the story, shouting and gesturing to the performers. The performers, in turn, have fun with the crowd. The ruda, for instance, will often hurl insults at the crowd in an effort to rile them up. The experience is very interactive! Despite the fact that the fights are staged, the cholitas also exhibit stunning athletic and acrobatic skill through their choreographed moves. Anyone who attends will be thoroughly impressed.

These fighting cholitas can be seen every Sunday at 2pm in El Alto’s Multifunctional Center located behind the Church of San Francisco. This location can be reached by mini-bus in about 30 minutes from central La Paz. Tickets cost about $7 USD at the door. There are also a number of tours which bring travelers to the fights, including Red Cap and Andean Secrets among others. However you choose to get there, you’re sure to have an amazingly interesting experience.

Quick Tip: The best option for transport in Ecuador is the new Ecuador Hop bus service, featuring many unique stops to help you discover the real Ecuador. 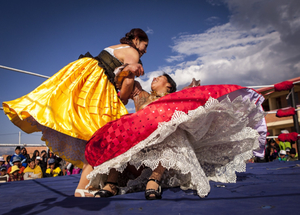 Be sure not to miss out on any of the incredible cultural and natural sites of La Paz and its vicinity. There are tons of excellent tours available in La Paz as well as in other parts of Bolivia. It’s also extremely easy to get around the country using Bolivia Hop’s excellent hop on hop off style service, so you really have no excuse for not taking advantage of everything this wonderful country has to offer!

To book a tour in Bolivia we recommend you use FindLocalTrips.com a search and comparison website for tours across all of South America.

If we are outside operating hours, we will call you as soon as we open again
Important: Our team will contact you via phone .
Note that phones operate from 9am to 7pm Peruvian time (Peruvian time now is: 11:31 am)