The diverse wildlife in Bolivia

Rugged and wild, with extreme altitudes and vast spaces of uninhabited rural land, Bolivia is one of the most biodiverse places on the planet. Its dramatic geography and climate – both of which vary greatly across the country – have led to the development of different ecosystems, allowing thousands of animal, bird, and plant species to thrive. 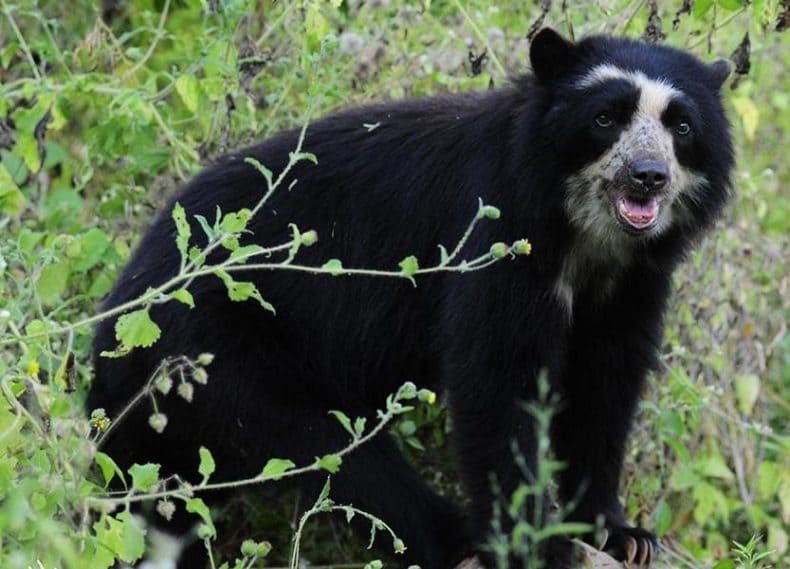 In fact, Bolivia is so biodiverse, it is thought that many species are just waiting to be discovered – in 2015, seven new animal species, and at least ten new plant species were found in Madidi National Park, one of the largest preserved areas in the country. Over 17% of Bolivia’s territory is protected, and whilst Bolivia itself only makes up 0.2% of the planet, it holds 35-45% of global biodiversity. If you’re a nature-lover, an eco-conscious being, or simply just curious, keep reading to discover more about the wildlife in Bolivia… and where to spot it.

One of South America’s endangered species, this beautiful mammal was once populous in Bolivia, but poaching between the 1940’s to 70’s drastically reduced its numbers. Hunted for its velvety-soft pelt, the Giant Otter was listed as endangered in 1999, with a population of 350 individuals estimated in 2002, and 271 animals in 2015. 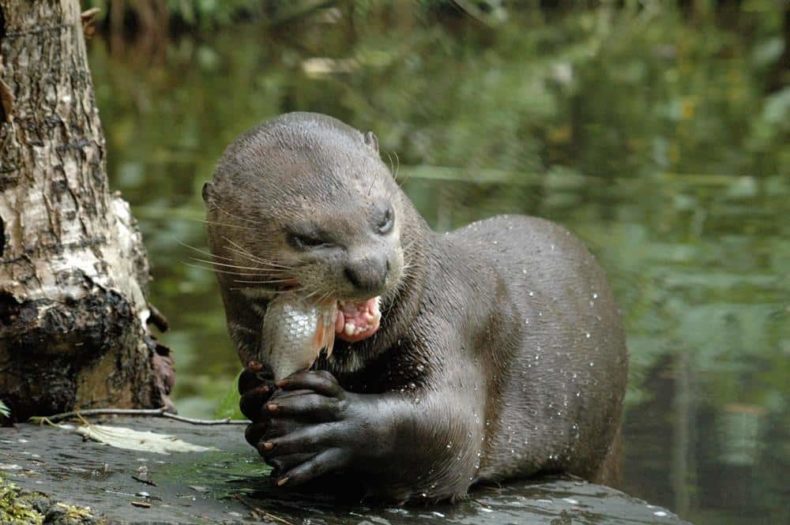 Its number today is mostly affected by habitat loss, pollution, and competition for food sources from fishermen. A carnivorous mammal, the Giant Otter hunts for food in freshwater rivers, streams, and lakes, eating mainly fish, including piranhas, and even small caiman. A strong and speedy swimmer, this is also the longest of the otter family, reaching up to 1.7m long.

The Giant Otter can be found in the Pantanal, which is the world’s largest wetland habitat in the far east of Bolivia. Alternatively, head to the northwest of the country to the Madidi River, which is part of the Amazon Basin, and runs through the Madidi National Park.

America’s biggest wildcat, reaching up to 2.4m long, these carnivores feed on meat and fish, and are strong swimmers, often found hunting turtles and caimans in the river.

Frequently confused with the leopard due to its similar colour and patterning, the jaguar’s coat is typically a tawny-yellow – although this can vary to reddish-brown or black – with rosette-like spots marking the fur. The key in distinguishing the jaguar from the leopard is to look for the spot found inside of the rosette marking, which the leopard does not have. The jaguar is also of a stockier build. 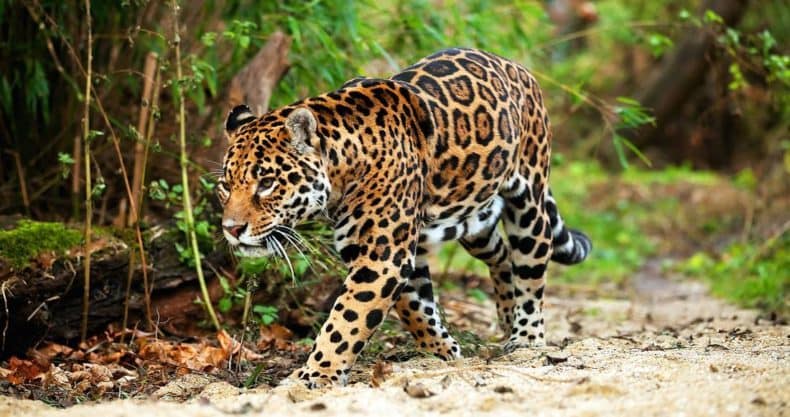 Named a vulnerable species, these wildcats have suffered from habitat loss, and more recently, poaching: between 2014 and 2016, organised crime has been reported in Bolivia. 800 jaguar fangs were seized between these dates, with attempted smuggling to China, where the teeth are used for medicinal purposes.

Furthermore, 87 of these magnificent animals were killed in just two areas alone of Bolivia (Madidi National Park and Pilon Lajas Biosphere Reserve and Communal Lands). Another factor in this marked crime is the drop in the number of rangers patrolling reserves, who have to cover vast areas for a low wage and little resources.

Another threat to the jaguar population comes from local farmers, who hunt these carnivorous wildcats in an attempt to protect their cattle.

This is a solitary animal, whose habitat tends to be in areas of dense rainforest, wooded expanses, and swamps. Go to Kaa Iya National Park, southwest Bolivia, where over 1000 have been recorded. Another option is Madidi National Park, where 19 individuals were listed in 2011. Alternatively try San Miguelito Jaguar Conservation Reserve, 3 hours from Santa Cruz just east of central Bolivia.

One of the largest wild mammals in South America, this native species is an elegant animal, related to the camel family. The Guanaco has a slender neck and graceful legs, with a coat which varies from light to dark brown. Not only can it run at 56km per hour, the Guanaco is also an excellent swimmer. Its predators include jaguars, cougars, and foxes. It lives in a herd, in the high plains and mountainous regions of Bolivia.

The Chacoan Guanaco is one of the region’s most endangered species, as their natural food source, the Chaco grasslands, is being eradicated. This is due to overgrazing of the farmed cattle. 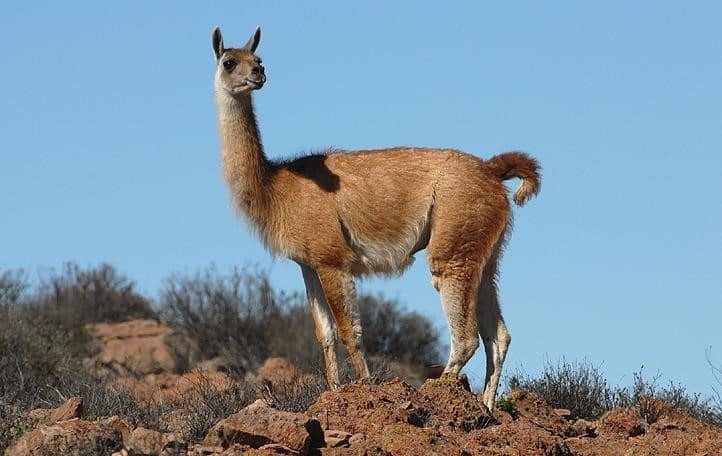 Developments of infrastructure have also reduced the grasslands, leaving the Gran Chaco dry forest under threat. It’s estimated that just 200 Chacoan Guanacos remain in the Bolivian grasslands, and less than a total of 600 across Bolivia, Paraguay and Argentina.

In southeastern Bolivia, on the Bolivian Plateau. Go to the Kaa-Iya National Park, which is part of the Gran Chaco, and is attempting to conserve the Chacoan Guanaco.

Bolivia’s very own river dolphins, also known as ‘bufeos’ are found in the upper Madeira river basin. With giant waterfalls and rocks barring at the Brazilian border, these dolphins are confined to Bolivia. Pinky-grey in colour, this rare dolphin is distinct from its relative, the more common Amazon river dolphin, being smaller, lighter grey, and with more teeth. 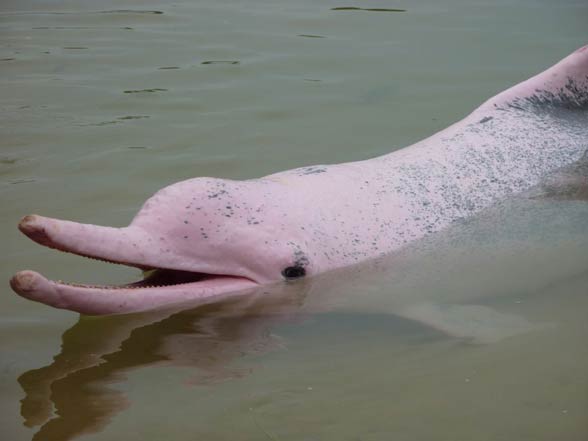 As this native species only populates the rivers of Bolivia, its protection is critical. Environmental disruptions include fishing, pollution, and habitat destruction, which all in turn affect their food source (fish). In 2012, it was announced that this special dolphin is part of Bolivia’s heritage and conservation.

The Madeira River, one of the Amazon tributaries in north-eastern Bolivia. If you choose to take a river tour from Rurrenabaque, ensure that it’s with a responsible operator.

2007: estimated number of bufeos in the Itenez and Mamore river basins in Bolivia = 4,570

This is the largest freshwater dolphin on the planet, reaching up to 2.8m long

One of the rarest flamingos on Earth, this brightly coloured bird flaunts various shades of pink, and is the only type of flamingo that has yellow legs and three-toed feet. Estimated at 34,000, the population of the Andean Flamingo is considered “near threatened”, and this statistic is not helped by the distinct reproductive habit of these birds, who lay just a single egg when they nest. 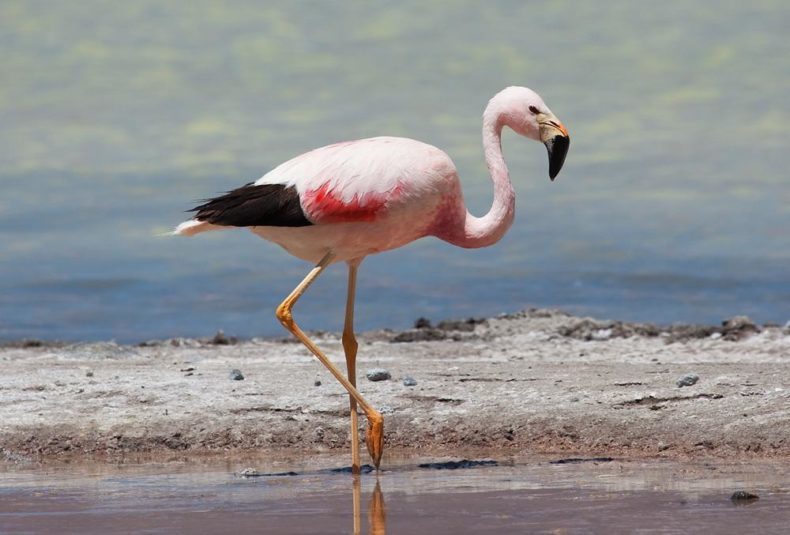 Inhabiting areas of extreme altitude (4,500m.a.s.l.) and a saline environment, these birds really are something special to survive in such inhospitable conditions.

Southwest Bolivia, on the Bolivian Altiplano. A popular place to spot this exotic bird is at the Laguna Colorada, a salt lake found in the Eduardo Avaroa Andean Fauna National Reserve, easily accessed on a three-day tour from Uyuni. Seeing these exotic, vividly-coloured birds wandering a harsh, unearthly landscape is a sight to behold.

This is the tallest of all flamingos. The habitat of these birds is affected by mining activities, drought, and in the past, egg collection.

So-called due to the rings of creamy fur around its eyes, this is South America’s only surviving bear species. A shy and often solitary animal, these omnivores primarily eat fruit, but also enjoy tough rainforest plants including cacti, and will even eat insects, birds, and small rodents.

The Spectacled Bear has a black, or a dark reddish-brown pelt, and is a stocky creature, averaging 1.5 to 2 metres high, with males up to 50% larger than females. Excellent, agile tree climbers, you’ll need look up to spot one! As these animals lead a nocturnal lifestyle, you’re more likely to see one napping in a tree nest than roaming the grounds. 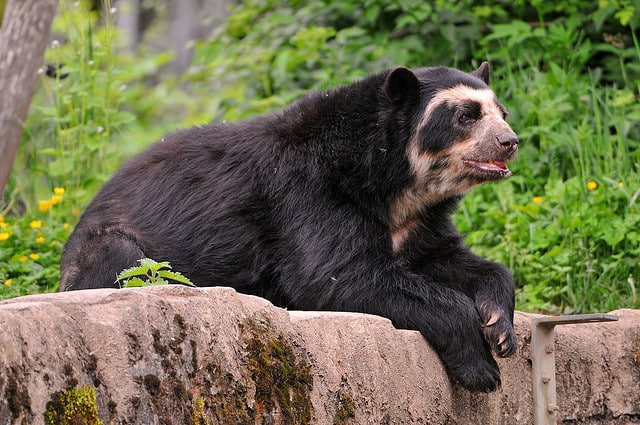 Currently, these peaceful creatures’ habitat is under threat from deforestation, and the development of infrastructure and industry (mining/petroleum). Moreover, local farmers hunt these bears to protect their crops from being the gentle omnivore’s next meal.

Also known as the Andean Bear, the name gives it away – head to the Andes Mountains, Western Bolivia. A great place to find this mysterious animal is Madidi National Park.

Conclusion – For the beautiful and varied wildlife in Bolivia to survive, it’s vital we maintain ecological balance. As a traveller we can help by only dealing with responsible tour operators and respecting the local fauna and flora wherever we go.

Looking for more stuff to do on your trip? Check out these places! 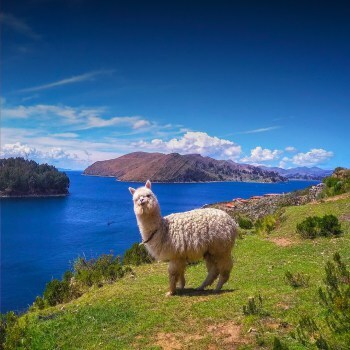 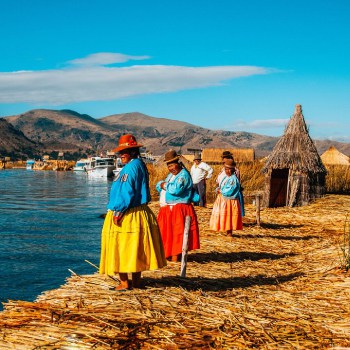 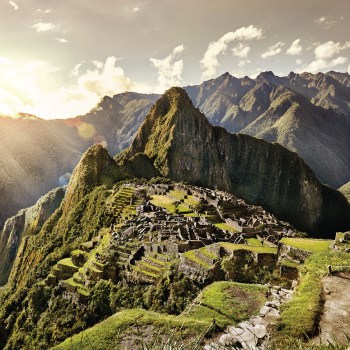 The Travelers Guide To The Ultimate Salt Flats Experience (And Photos)

If we are outside operating hours, we will call you as soon as we open again
Important: Our team will contact you via phone .
Note that phones operate from 9am to 7pm Peruvian time (Peruvian time now is: 1:02 pm)